One Farm, One Family, Five Generations

Villa de Sales is woman-owned and operated by Angel Forbes Simmons, third cousin to Mary Todd Lincoln. Angel’s family farm in Aquasco, Maryland has been in continuous operation since 1802 when her ancestors from the Bowling and Forbes families began planting tobacco in Prince Georges and Charles counties. Her great-great grandparents, Col. John Dominic Bowling (1805–1874) and Elizabeth Gill Bowling (1814–1893) were landowners and planters in Woodville, now Aquasco. Upon John’s death, his estate was divided among his 10 children. His daughter, Frances (Fanny) Bowling Forbes (1853–1929) and her husband, George Forbes, Jr. (1844–1931), Angel’s great-grandparents, used their acreage to grow tobacco and raise horses. In 1877, they built a High Victorian Gothic-style home, and Fannie named it Villa de Sales after St. Francis de Sales and Mount De Sales Academy, the beloved high school she had attended in Baltimore. 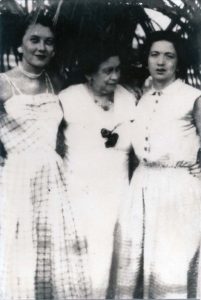 Eugenia with her daughters, Mittie and Patty

Rosalie Eugenia Hall Forbes (1894–1959), Angel’s grandmother, married George Francis Forbes (1880–1956) in 1917 as the U.S. entered WWI. She began working on the farm that year. Then in 1918, Eugenia served as a nurse in WWI France. She returned to Villa de Sales after the war to run the farm and raise her family. In 1931, she gave birth to Mittie Forbes Simmons, Angel’s mom, at Villa de Sales. Eugenia took over ownership of the farm after Fanny’s passing.

Mittie worked on the farm as a child but later moved to Florida after getting married. In 1959, Mittie inherited the current 46-acre parcel on which stand the original house and stables. She was adamant about keeping the farm in the family, but since she was living in Miami, she rented the house and left her brother, Bobby Forbes, in charge of the farm. By that time, Villa de Sales was producing tobacco, corn, and soybeans.

Mittie’s daughter, Angel, was a bona fide city girl. Born and raised in Miami Beach and working in Seattle as a manager in a hospital, she knew only the fast-paced world of cosmopolitan living—and nothing about farming. That all changed in 1996 when Bobby suffered a heart attack. Angel knew that as an only child, it was up to her to save the family farm and the 19th-century Victorian Gothic home of her mother’s birth.

When Angel arrived at the farm in 1996, the house and stables were in very poor condition. The house had not been lived in by a loving owner for over 40 years. There was no electric, no running water, and large holes in the roof. Conditions in the house were so poor, that for about three months, Angel lived in a tent set up in one of the rooms.

The city girl traded in her briefcase and took the helm of Villa de Sales farm. But there was a problem: Angel didn’t know a thing about farming. So she researched everything she could about what she could till or raise on the land. Angel considered raising emu, buffalo, and other livestock for the meat, but she had an aversion to slaughtering animals. It just wasn’t for her. She considered growing shiitake mushrooms, ginseng, organic vegetables and herbs, flowers—even tea. With the house on the property listed on the National Register of Historic Places in 1988, she had envisioned marketing the tea as “American tea.” The original Villa de Sales farm was very large in terms of both acreage and tobacco production; but the remaining 46 acre parcel needed a different solution to remain self-sustainable in today’s economy.

“I had to come up with something that didn’t need tons of capital,” Angel said. “This place was falling down. I didn’t have the resources to wait.”

In October 2007, the State of Maryland and the Maryland Department of Agriculture, after extensive historical research and verification, awarded Villa de Alpacas Farm at Villa de 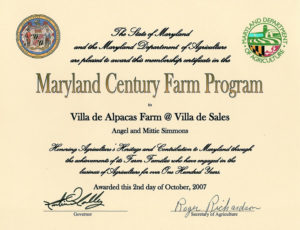 Sales membership in the Maryland Century Farm Program, “Honoring Agriculture’s Heritage and contribution to Maryland through the achievements of its Farm Families who have engaged in the business of Agriculture for over One Hundred Years.”

Additionally, Villa de Sales was recognized as one of only four Bicentennial Farms in the state, having been run by the same family for over 200 years.

Historical Timeline of our Family and Farm:

After exploring many options for farming the land, Angel finally decided: “Alpacas just seemed like the perfect fit!” She purchased her first alpacas in 1996 to make what used to be a successful family tobacco farm self-sustainable again. No slaughtering would be involved. It wouldn’t require buying a lot of farming equipment or having miles of acres like other livestock. And the docile animals would be easy for her to handle as a sole proprietor.

We are proud members of the Daughters of the American Revolution, National Society of the Colonial Dames of America, the Maryland Historical Trust, and the Historical National Trust

In 1998, Mittie and Angel’s dad returned to Villa de Sales, so that Angel could help Mittie care for her dad who was suffering with Parkinson’s disease. By 1999, Angel had converted the family farm primarily into an alpaca business, and named her new venture Villa de Alpacas Farm.

Angel, Mittie, and Eugenia have all been lifelong members of the DAR and National Society of the Colonial Dames of America

Today, Villa de Alpacas Farm is recognized as the oldest and largest alpaca and llama farm in Southern Maryland. Angel raises alpacas and llamas on about 12 acres of the farm, and has put the balance into a timber management plan. The alpacas are sheared yearly for their fiber, and the fleece is used for manufacturing alpaca yarn, clothing, and textiles.

Angel Forbes Simmons is one of only 4 farmers recognized in 2007 by former Gov. Martin O’Malley for their continued commitment to farming. Only four remaining farms in the State of Maryland—including Villa de Alpacas—have been family businesses for more than 200 years.

If someone told me 20 years ago that I’d be raising alpacas, I never would have believed them.

Our alpaca farm: a word from Angel

One of only 4 Bicentennial Farms remaining in Maryland—owned, maintained, and run as a farm for over 200 years by the same family

Three commercial textile looms including two Lan Mark FeltLOOM®s and the largest Rigid Heddle Loom on the East Coast, specifically set up to make blankets and textiles from our “Victorian Bouclé Yarn” (a 100% mixture of our own alpaca & llama fleece reserved exclusively for our finished products)

I purchased my first alpacas in 1996 to make what used to be a successful family tobacco farm self-sustainable again. I did a lot of research before purchasing my first alpaca, trying to find the “perfect” agricultural business for a small farm (which used to be a very large farm in terms of acreage and production. This research led me to many different avenues in alternative agriculture such as raising emu, buffalo, and other livestock. I was not interested in slaughtering my animals, even though I understand why there are industries which must do so. This just wasn’t for me I also thought about growing shitake mushrooms, ginsing, organic vegetables and herbs, flowers, even “tea.”

The gentle alpaca seemed to fit a perfect mold, as they are easy to handle and don’t need a lot of fancy equipment to maintain them, or miles of acres like other livestock (I didn’t have either of these things to begin with!) My alpacas have made my family farm not only self sustainable again, but a very successful and most enjoyable business. Alpacas have allowed me to begin to properly restore a farm which has belonged to my family for over 200 years, as well as to properly restore a large Victorian home built by my great-great grandfather over 140 years ago. Alpacas and the manufacturing and sale of fine alpaca products have been my one and only business and income since 1996. If you have any questions at all about alpaca farming or products, please do not hesitate to contact me. 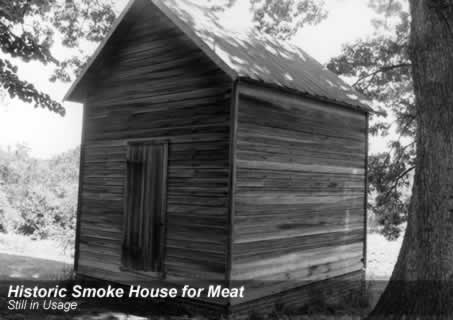 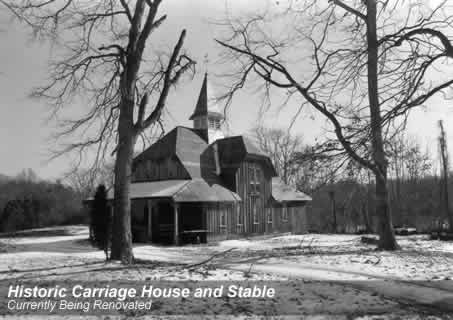 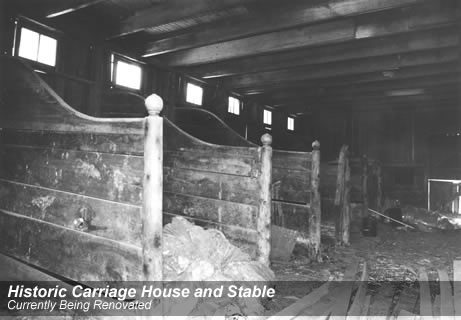 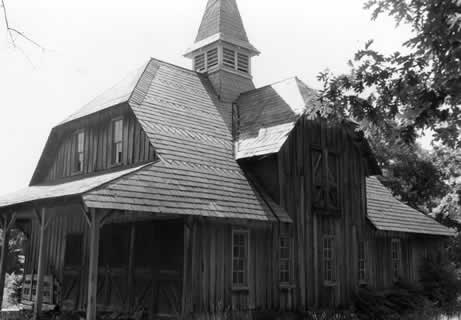 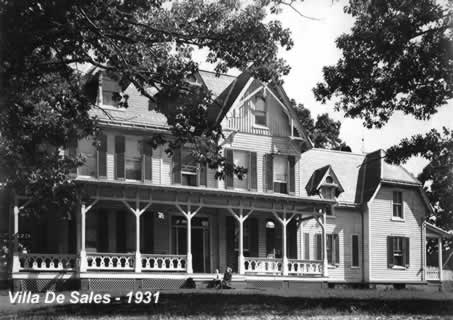 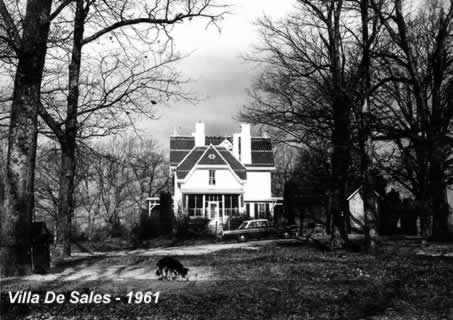