Community group claimed new subdivision in Aquasco meant too much growth, too fast 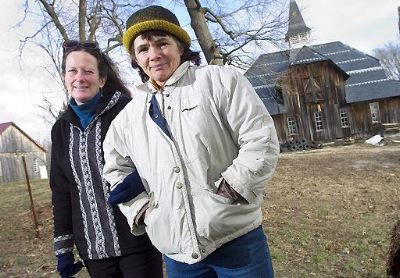 Joanne Flynn (right) and Angel Forbes Simmons are members of the Greater Baden-Aquasco Citizens Association, a community group that has filed suit to prevent the county zoning board from allowing a housing development on a parcel of land known as the Shultze Property. (photo by Christopher Anderson/the Gazette-Star)

Angel Forbes Simmons (left) and Joanne Flynn are members of the Greater Baden-Aquasco Citizens Association, a community group that has filed suit to prevent the county zoning board from allowing a housing development on a parcel of land known as the Shultze Property.

Rural tier preservationists are claiming victory following a Dec. 23 decision by the Maryland Court of Appeals that orders Prince George’s County planning officials to reconsider a plan for a 118-acre, 20-home development in Aquasco.

The Greater Baden-Aquasco Citizens Association and other residents filed a petition in Prince George’s County Circuit Court for a review shortly after planning officials approved the preliminary subdivision plan in 2006 for a plot known as the Schultze Property.

The association argued the plan would spur more growth than the county’s General Plan allowed for in the rural tier, a southeastern section of the county characterized by its agricultural history and its residents’ fierce opposition to development.

In a unanimous decision, the seven-judge court found that planning officials failed to consider whether the preliminary plan upheld a section of the General Plan that limits growth in the rural tier to 1 percent of total county growth.

“This case presents the opportunity to weigh in on a dispute that has been simmering in Prince George’s County apparently for several years,” wrote Court of Appeals Judge Glenn T. Harrell Jr.

“It’s a huge victory,” said G. Macy Nelson, a Towson-based attorney who represented the community members. “The only data shows there has been much more than the 1 percent — they have to scale back on development.”

Attorney M. Andree Green, who represented the Maryland-National Capital Park and Planning Commission, declined to comment on the court’s ruling. The M-NCPPC oversees the county’s planning board.

The planning board’s next step will be to schedule public hearings, in order to meet the court’s order of further review of the preliminary plan, Green said. She added that she does not believe the decision represents a moratorium on future development in the rural tier, an opinion shared by community members.

Joanne Flynn, a Baden resident and board member of the Greater Baden-Aquasco Citizens Association, said that, although she recognizes the planning board could still approve the preliminary plan after further review, she hopes the court’s ruling will at least slow the pace of future development.

“There’s going to be some growth, but if you let it go at the rate it was going … you won’t have the farms and the potential to bring back agricultural resources,” Flynn said. Residents also are concerned that adding more homes will place pressure on already strained local fire departments, police stations and schools, Flynn added.

“The value of this area stems from the fact that it remains rural,” said Aquasco resident and association board member Eric Gangloff. “Not just aesthetic value but also value to the public good rests on the fact that the country maintains this as an undeveloped rural area.”

The matter reached the Court of Appeals after the planning board challenged decisions from both the Circuit Court and state Court of Special Appeals to send the plan back for further review.

Curbing development in the rural tier is at the heart of several other cases moving through county or state court. Most recently, the Accokeek, Mattawoman, Piscataway Creeks Communities Council filed a petition in Circuit Court on Oct. 9 to nullify the Subregion 5 Master Plan, which governs how land is used in the southeastern sections of the county.

“We’re losing our rural land and any kind of agricultural economy,” Flynn said. “I just hope things don’t go back to the way they were.”