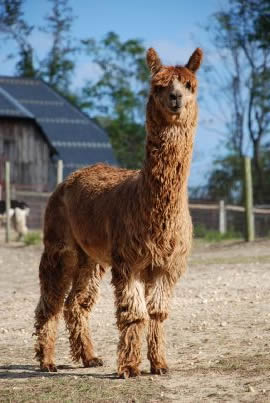 Fireball has a super powerful presence in the field. He never, ever takes a bad photograph and always looks “perfect.” He truly stands out, with extremely solid bone, a fantastically shaped suri head, great coverage, and beautiful lock structure with lots of luster—all in a very striking and unusual carmel/molasses color.

Fireball has some awesome genetics. His sire is Acero Marka’s Chasqui – Ameripaca’s premier, full Bolivian, suri herdsire. Chasqui has probably thrown more blue ribbon & champion offspring than any other Ameripaca suri herdsire. The list of show-ring winners goes on and on. Chasqui is out of Acero Marka’s Poptart. Poptart is one of Gail Campbell’s most favorite alpacas on the Ameripaca farm, and thus will never be for sale. Even though Poptart is an older girl now, she looks like a youngster – maintaining great lock structure (after being shorn many times with electric shearers), and a strong presence of solid bone, perfect conformation, and the “best” suri head. 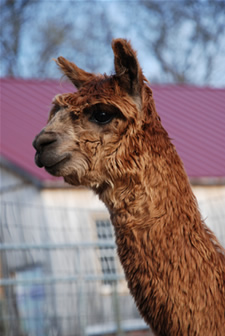 Fireball’s famous relatives include many suri alpacas which sold for high dollar at the Breeder’s Choice Auctions from 2000–2007. Their names include Ameripaca’s Marmie (sister) purchased by Park View Alpacas, as well as Ameripaca’s Tootsie Pop, also purchased by Park View Alpacas. Other notable sisters that sold for high dollar are AABC Shelby, Ameripaca’s Suzette, and Keely. Fireball’s maternal grandsire is 4Peruvian Great Balls of Fire – another very famous suri herdsire.

Fireball’s first cria (all dark colored suris) arrived in the Fall of 2008. Due to Fireball’s famous pedigree & strong suri phenotype with fantastic lock structure, solid bone, and great coverage, I would breed him to any suri female to improve upon her traits. He would be perfect to breed to dark females who need improvements in their suri phenotype, as I believe the offspring would maintain that special Chasqui “look”, but in a dark colored, high quality suri format.

Sweet Melissa is a dark fawn, vicuna patterned suri female who has been an outstanding producer for me. Melissa is an EXCELLENT mother. She births her crias without any problems whatsoever, and she has always had great colostrum and then tons of milk. Every one of her crias had IgG’s over 2000!

Melissa is a very robust dam herself. She is not the type of female who gets “thin” after the heavy nursing of crias. In fact, she requires very little grain or no grain at all. (I always provide good pasture and excellent quality hay, though.) Even though her crias often gain a pound a day, as a mother, Melissa maintains her own weight well. I love this type of very low maintenance dam! Melissa has also gotten pregnant in either one or two breedings at the most! Again, she proves herself as a very easy keeper, and the type of mother you would want in a suri breeding program.

Chasqui is very upright with outstanding conformation, great suri style, and a gorgeous head. His dam, Pop Tart won 1st Place Suri Produce of Dam at the 1999 Eastern Alpaca Jubilee. Pop Tart is a light fawn with a unique color pattern – allowing a greater chance for Chasqui to throw color when bred to color.