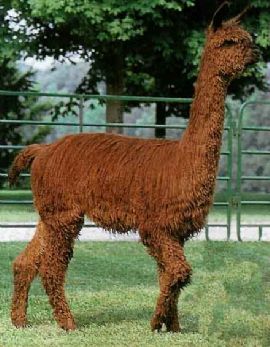 Dexter Brown is the type of herdsire that adds tremendous coverage to his offspring, along with stamping a very typey suri head which established suri breeders are trying to attain. I honestly believe that Dexter Brown stamps some of the best coverage to his 100% suri offspring in the entire industry. I don’t make this statement lightly, as I have been breeding suris since 1996.

Dexter’s sire is Acero Marka’s Harry Brown-one of the most famous dark brown herdsires in the industry. He was an integral member of Ameripaca’s suri foundation breeding program, and for the longest time was known for producing some of the most expensive suris in the industry-often producing the highest suri sellers at The Ameripaca/Magical Farms Breeder’s Choice Auction and Futurity.

If I want to add lots of coverage, color, pencil locks, solid bone, and a typey suri head to my suri offspring, then Dexter is the herdsire I choose. Dexter “fixes” these traits in dams who may be lacking in these areas, just in one generation. I have never been disappointed in Dexter Brown’s crias making big improvements over their mothers when bred to him. Look at his crias shown here; all have great suri heads, fantastic coverage, & lustrous pencil locks.

One of my favorite traits concerning Dexter is the amount of coverage on his ears. Take a look at his photo! Honestly, we are talking head to toe coverage on this herdsire, with super density. He reminds me a lot of the late Ricardo-a magnificent suri herdsire known for throwing the same robust traits in his offspring. Yet an added benefit of Dexter is that he adds more color!

I consider this awesome herdsire as my true “ace in the hole.” If I have a female not getting pregnant very easily, I will switch the service sire to Dexter; he most often gets the job done in one breeding. Thus he saves me a lot of money and time in the future. What a great investment Dexter Brown makes in any serious suri breeding program!

Rita is out of Acero Marka’s Boleto. Her grand-sire is Preferred Stock.

Harry Brown was an integral member of Ameripaca’s suri foundation breeding program. For years he held the title of producing some of the most expensive suris sold at auctions and across the country.