Goliath is a most unusual grey roan out of a grey roan dam – Acero Marka’s Hey Girlfriend – and a black sire – Acero Marka’s Sergio. Every cria that Goliath has thrown, has been colored, with the lightest being a dark fawn – even when bred to white females with long lines of white pedigree. All of his crias have been high quality, colored suris – showing excellent coverage, good lock structure & luster, and outstanding conformation. The majority of his offspring have been extremely dark (darker than dark brown) and mostly black, with a few grey roans as well.

So far, I have had little difficulty in selling his offspring, and to date, Goliath has given me my best financial return as a suri herdsire. Every one of his females has sold quickly, whenever I have advertised them for sale, due to their color and quality. I have sold his females for as low as $22,000 and as high as $54,000. If you are looking for color to add to your breeding program, Goliath is your man!

Each of his dark crias listed here, are out of light females. This is significant as it shows how he can pass his color, even when the dam doesn’t appear to have this in her genes. 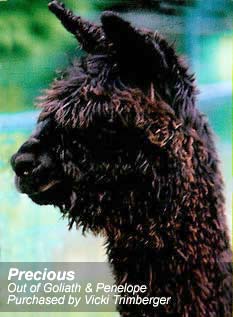 Hey Girlfriend was a most unusual grey roan. She was an integral member of Ameripaca’s foundation herd for many years, and thus would never be for sale.

Sergio is Shasta Spring’s favorite – a wonderful herdsire and a producer of multiple Blue Ribbon Offspring. He has amazing coverage and incredibly soft hand and luster. Sergio has consistently produced black and bay black crias when bred to pintos. He has produced several gorgeous, rose greys crias as well. Sergio stamps his fine pencil locked,lustrous fleece on all his offspring. He also has a perfect bite and correct upright conformation.

Sergio stands like a champion – always making his presence known. His reputation is legendary and settles most females in one breeding. He has even received a reputation for settling the “difficult” female. We are so very proud of this Full Bolivian Import.