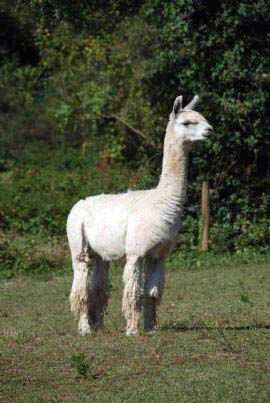 Gilligan is a full Peruvian, light fawn suri herdsire with black pigmented skin throughout his perfect, conformational body. His sire is MMF Dreamweaver – a magnificent true black suri herdsire who is the FULL BROTHER to Black Chip (part interest in Black Chip is selling for over $30K). Dreamweaver settled his first females before 2 years of age – a trait that often runs in the family. Gilligan followed in his sire’s footsteps, and thus we assume that Gilligan’s male offspring will also “settle” early. Dreamweaver won 1st Place at the 2000 Eastern Alpaca Jubilee and 1st Place at the 2000 North American International Livestock Expo. 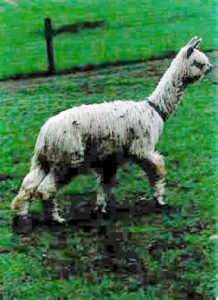 Gilligan as a cria

Gilligan’s paternal grand-sire is 4Peruvian Magnifico – one of the most famous dark rose grey suri herdsires in the country known for throwing over 22 greys! Gilligan’s maternal grandsire is Pperuvian Uribe (part Accoyo). All of Gilligan’s relatives have done extremely well in the show-ring and have sold for HIGH Dollar.

Gilligan throws crias with outstanding coverage and dense, well-locked suri fleece. His crias are often darker than him, even when bred to white dams. I choose Gilligan to breed to my colored dams in order to increase my chances of obtaining a dark colored cria with outstanding fleece coverage from head to toe, excellent density, yet well-locked fleece with a perfect suri phenotype. Furthermore, Gilligan has a gorgeous, suri head – the type that established suri breeders are trying to attain.

If you want super high quality suri genetics with tons of the industry’s best known greys & blacks in your own suri breeding program, Gilligan is your man!